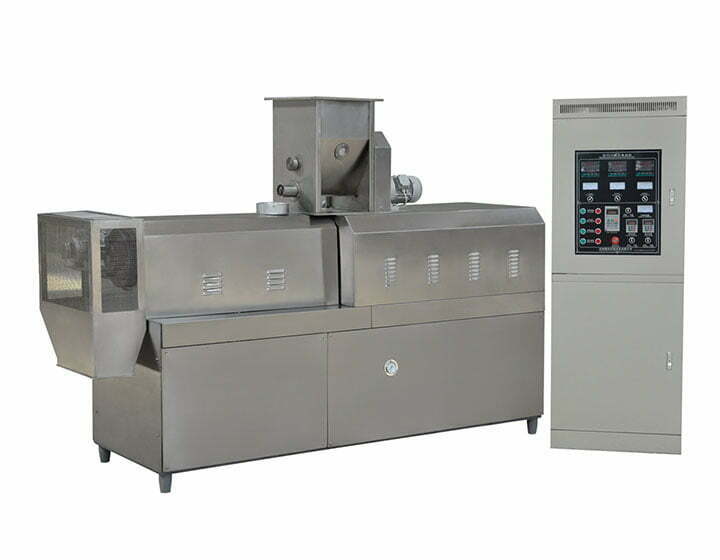 Extruder is a machine that can squeeze and heat the raw material into puffed and cooked one. The working principle of the entire machine is to use high temperature and pressure to expand the raw materials and become cooked food. The raw material of dog food is usually grain meal, meat meal, bone meal and so on.

Extruder usually has two types, single screw extruder and twin screw extruder. The former is more suitable for making pasta such as macaroni, while the latter is widely used for making pet food. In recent years, dog food making machine has becoming more and more welcomed by many countries. Because with the improvement of people’s living standards, raising pets has become a popular lifestyle. So more and more people need to buy better and more suitable food for their pets. This demand has created new business opportunities, and the dog food making machine has become a new and promising production and processing machine.

The South African pet market has very huge potential. The country is a major importer of the pet food market. Since 2014, South African pet food industry sales have continued to grow. According to 2014 data, there are 9.1 million dogs and 2.4 million cats in South Africa. The value of imported and exported pet food in South Africa in 2016 was estimated at USD 40 million and USD 20 million, respectively. It can be said that the dog food making machine has become a very potential investment project.

According to a report from Taiwan ’s “Central News Agency” on June 18, the cost of owning a pet dog in South Africa is about 20,000 rand per year, while the cost of a cat is halved. But local owners think the money is well spent. The pet market in South Africa is moving towards the humanization of animals. The owner chooses to take care of the pet in an upscale manner and make the pet an important member of the family. Pets not only have high-quality food and comprehensive medical care, but also their unique blankets and bedding.

In October of 2019, a customer from South Africa purchased a complete pet food production line from us. We negotiated for about 3 weeks and he finally decided to purchase the whole plant from us. He needed this line to produce dog food. And he was very satisfied about our dog food making machine.

You can easily contact us online and we will respond to you promptly. Welcome to our company for on-site inspection, our specialists will provide you with airport pick-up and accommodation arrangements.